Military shadow boxes are designed to protect and display the most special American flags. Often they hold the flags of veterans. Sometimes those memorial flags rest atop the caskets of veterans who have passed. These flags are irreplaceable and deserve the most special treatment and protection.

This Christmas, a military shadow box protecting a very special American flag was rescued from the flames of a house fire and certain destruction. The flag had draped over the casket of WWII Army Air Corps veteran and POW Forest Clifford Corley. Following his interment, the flag and military medals were placed into a shadow box and displayed at the Rome, Georgia, home of the veteran’s grandson, Army veteran David Corley. When Corley’s home caught fire, the shadow box and the irreplaceable American flag inside were in danger of burning up with the house.

Fortunately, local Floyd County firefighters were quickly on the scene. Upon entering the house, they immediately worked to extinguish the fire. But firefighters also spotted the military shadow box, its military medals, and the American flag inside. The shadow box and flag were near a fireplace that started the fire, and the fire was already reaching the flag case and its flag.  The firefighters immediately recognized the importance of the flag. Knowing the flag was irreplaceable, they made rescuing the flag a top priority along with extinguishing the fire.

The fire crew was led by Battalion Chief Danny Lee, who himself is a veteran. Lee said his firefighters know he’s a veteran and that they knew Lee would have seen the military heirlooms if they had been left behind. Presumably that wouldn’t have gone over well back at the firehouse. “Replacing (that American flag) is not an option,” Lee said. The firefighters treated the flag case, military medals and American flag with great honor and dignity.

Corley’s wife Amanda was moved to see the dignity and respect with which the firefighters treated the American flag, shadow box and military medals. She said that when firefighters removed the military shadow box, they carried it “like a child.” She said one firefighter carefully removed the flag from the box and began patting it down with water. She said it was “like watching them work with a human,”

“(The firefighters) saw that (the military shadow box) was there and wanted to make sure they did everything to preserve it,” Lee said. “They handled the heirloom while extinguishing the fire … (and) were able to give it back to the family that evening.”

Among other possessions, the family lost all the Christmas presents for their three boys in the blaze. News of the fire was broken to Corley as he was on a truck driving run through Missouri. His wife Amanda told him his family was safe, and that despite what was lost in the fire, his grandfather’s American flag, medals and shadow box were safe, and that “those memories will always be there.”

“They went above and beyond,” Corley said in a voice choked with emotion. “I can’t thank them enough.”

Corley said his grandfather rarely spoke of his experiences in the U.S. Army Air Corps. His grandfather’s American flag, military medals, knife, and 21-gun salute shell casings are some of the few remaining memories of Forest’s service. As an Army veteran himself, the American flag already holds a special place in his heart.

“My grandfather, myself, my nephew, my mom, my dad, my step-dad, the millions of current and former, they served for that flag,” Corley said with deep emotion.

Because the flag received damage, Corley said he plans to retire the flag and place a new American flag inside his grandfather’s military shadow box. 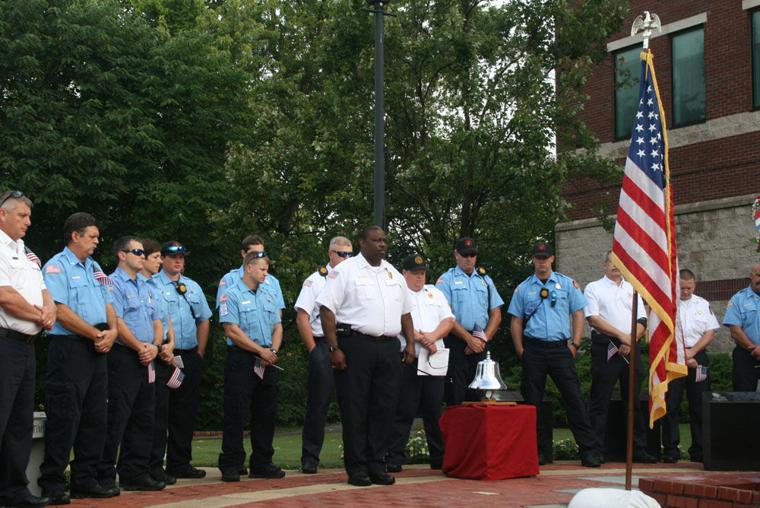 Rome-Floyd County Fire Department Battalion Chief Danny Lee with his firefighters ringing a bell for the Last Alarm at a memorial ceremony to honor the first responders who died during 9/11.